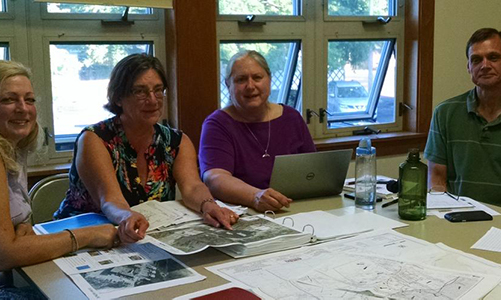 The Olin Chemical Superfund Site is located in Wilmington, MA. At Olin, from 1953 to 1970 wastes were discharged into lagoons, ponds, and a man-made area called Lake Poly. Prof. Bevin Engelward (Program Director) and Dr. Kathy Vandiver (Director of the Community Engagement Core) met with leadership from the Wilmington Environmental Restoration Committee (WERC) on July 26th 2018. Representatives from WERC included Suzanne Sullivan, Martha Stevenson, Liz Harriman, and Gary Mercer. WERC has been meeting regularly for over 15 years, so they have a great depth of knowledge regarding the Olin Chemical Superfund Site. The major concern of WERC is the presence of N-nitrosodimethylamine (NDMA), which is a chemical that causes cancer in animals and is a probable human carcinogen. NDMA was not directly generated by Olin activities, but rather it is created when chemicals dumped into the environment react with one another. At Olin, the chemical constituents needed to make NDMA are at high enough levels that NDMA has become a serious health concern.

The MIT team shared with WERC key research initiatives being undertaken to address the public health impact NDMA. NDMA can be metabolized in the body to form methyldiazonium ion, a highly reactive intermediate that can add methyl groups to the DNA, creating modified bases, including 7-methylguanine (7meG), 3-methyladenine (3meA) and O6-methylguanine (O6meG). These modified bases are of concern because these structural changes to the DNA can lead to cytotoxicity and mutagenicity. For example, 3meA is a lesion that inhibits DNA polymerases. As a result, replication forks can break down, creating a DNA double strand break that is both toxic and mutagenic. O6meG is a lesion that promotes mispairing, leading both to point mutations and to toxicity as a result of ineffective repair. The 3meA lesions are repaired primarily by the alkyladenine DNA glycosylase (AAG), while the O6meG lesions are repaired by methylguanine methyltransferase (MGMT). Members of the MIT SRP have created transgenic mice lacking these key DNA repair genes, where integrated transgenes enable analysis of DNA mutations. This puts the team in a strong position to study the effects of NDMA in vivo in animal models, work that is ongoing.

The WERC team shared with MIT their concerns regarding NDMA in the water. While there is a ‘holding area’, where much of the hazardous wastes at the Olin Site are sequestered, the holding area is known to be leaky. In particular, the base of the holding area is bedrock, but it is not clear that the bedrock is forming an impermeable barrier. Rather, there is evidence that the bedrock is fractured, which could allow NDMA to leak into surrounding areas and potentially contaminate nearby wells. WERC is concerned about these possible fractures, which are being investigated by the EPA.

When NDMA was discovered in well water, steps were taken to assure safe drinking water. Almost all the residents of Wilmington now have municipal water, and by avoiding use of well water, exposure has been greatly curbed. However, there are still homes that use well water. While some of these residents drink bottled water, there is still concern that NDMA in well water used for showering, washing dishes and washing clothing may be hazardous. This is an area of concern that the MIT team aims to explore further.